Bangrak
The Village of Love

Bangrak: The Village of Love

Welcome to February! Valentine’s Day is just around the corner, and what could be more perfect than doing that little bit something different with your loved one? 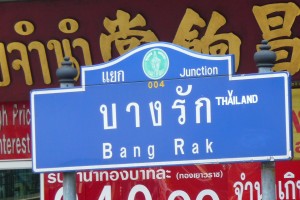 Our signature tour is based in Bangkok’s Bangrak, or translated into English, “Village of Love” which locals deem as being one of the best areas for food in Bangkok. Many of the food stalls, shops and recipes here are ones that have been passed down from generation to generation. It is an absolute must visit area for foodies.

In its early days Bangrak was a busy trading port, however it has continued to grow and is now an urban metropolis and home to many popular luxury hotels (we in fact visit the street side restaurant that supplies the duck to many of them). Bangrak is a very special area of Bangkok as it can claim many firsts: the first printing Thai printing press began here, this was where the first automobile was seen in Bangkok. The main road, Charoen Krung Road was built during Rama IV’s reign and is one of the earliest roads in Thailand to be built using western construction techniques.  The surrounding area of Silom (windmill) was named after the many windmills which were used to draw water from canals for the large orchards in the area.

However do you know the history behind the actual name Bangrak?

There are two stories behind the name.

The first is that Rak refers to a kind of canal plant in the district and there used to be a huge Rak tree sunken into one of the canals, but the second, more common, and to be honest our favourite is that the original Thai spelling translated to Village of Cure (raksa means “to care for” in Thai), and over time the Thai spelling was shortened rak which means “love” transforming the meaning and the area into Bangkok’s one and only Village of Love.

Which is apt. Because who doesn’t love food? Love and food are synonymous and many would still attest to the old saying “the stomach is the way to a man’s heart.”

In Thailand, tradition and the desire of good fortune includes special rituals on Valentine’s Day, such as that of women travelling to the Trimurti shrine and laying roses, lighting candles and burning incense sticks at the Hindue deity’s feet. This ritual is performed in order to guarantee a good husband.

Valentine’s Day also means a rise in the number of marriages which take place on that day. This is a sure fire way too never forget your anniversary each year!

So for that little bit of je ne sais quoi for your Valentine, book on our special tour today. Don’t worry, we will still be visiting all of our usual favourite places, but as a show of our love for you there will be a special complimentary Valentine gift, for those in love and who should be in love!

We look forward to welcoming you to eat your heart out and fall in love on Valentine’s Day with us!